John O. Dabiri, Professor of Aeronautics and Bioengineering, has big plans for a high school in San Pedro, military bases in California, and a small village on Bristol Bay, Alaska. "We have been able to demonstrate that using wind turbines that are 30 feet tall, as opposed to 300 feet tall, could generate sufficient power for wind-farm applications," Dabiri says. "One of the areas where these smaller turbines can have an immediate impact is in the military." The Office of Naval Research is funding a three-year project by Dabiri's group to test the smaller vertical-axis wind turbines (VAWTs) and to further develop software tools to determine their optimal placement. "We believe that these smaller turbines provide the opportunity to generate renewable power while being complementary to the ongoing activities at the base," Dabiri explains. [Learn More] 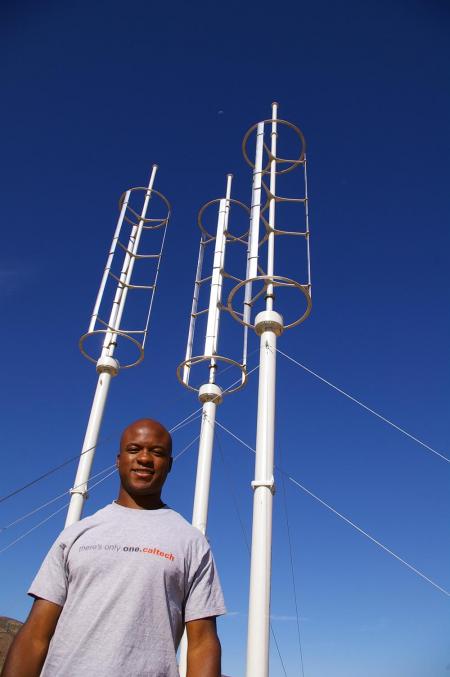 John Dabiri with three of the vertical-axis wind turbines (VAWTs) at his experimental wind farm in Northern Los Angeles County.